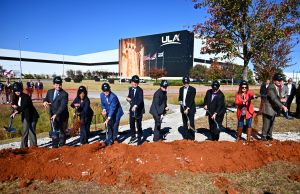 On October 27, United Launch Alliance (ULA) broke ground on a facility to support one of the largest commercial launch contracts in history with Amazon. Amazon has an agreement to use ULA's next-generation Vulcan rocket for 38 launches to deploy its "Kuiper" broadband satellites. The 500,000-square-foot expansion equals an investment of $300 million and will eventually allow ULA to double its launch rate.

ULA is also investing in a new building for their strategic partners, Beyond Gravity, on the property to increase manufacturing capacity of Vulcan's payload fairings. The  entire expansion project is expected to be complete by April 2026 and create 250 new jobs.

In August, the Industrial Development Board approved tax abatements for the ULA expansion that consists of new equipment, building improvements and infrastructure.